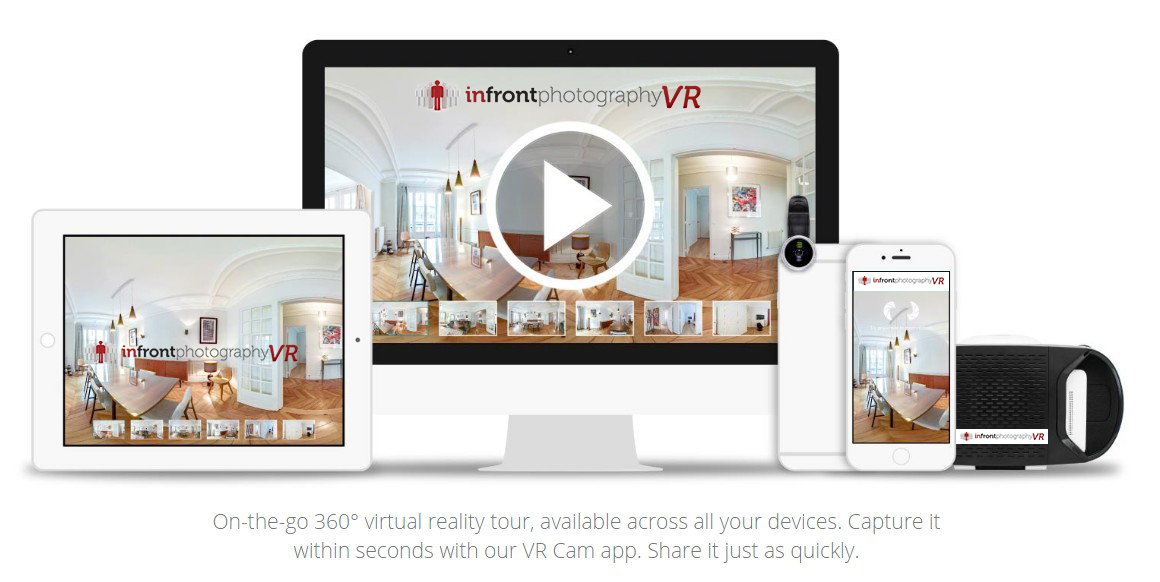 A Infront PhotographyVR tour is a simulation of an existing location, usually composed of a sequence of videos or still images. It may also use other multimedia elements such as sound effects, music, narration, and text. It is distinguished from the use of live television to affect tele-tourism.

The phrase “virtual tour” is often used to describe a variety of videos and photographic-based media. Panorama indicates an unbroken view, since a panorama can be either a series of photographs or panning video footage. However, the phrases “panoramic tour” and “virtual tour” have mostly been associated with virtual tours created using still cameras. Such virtual tours are made up of several shots taken from a single vantage point. The camera and lens are rotated around what is referred to as a no parallax point (the exact point at the back of the lens where the light converges).

For most business purposes, a virtual tour must be accessible from everywhere. The major solution is a web-based virtual tour. In addition, a rich and useful virtual tour is not just a series of panoramic pictures. A better experience can be obtained by viewing a variety of materials such as that obtained from videos, texts, and still pictures in an interactive web content. There are many ways to gather data in a mixed web content, such as using rich content builders (Java applet or Adobe Flash being two examples) or a Web content management system.

Flash-based tours are becoming very popular today. A study done by the PEW Research Group showed that more than 5 million Americans watched virtual tours every day in 2004. PEW’s research data which showed that Americans watching virtual tours rose from 54 million people in 2004 to 72 million people by August 2006, a two-year increase of 18 million.

Thanks in part to the recent explosion of many Internet devices, such as Apple’s iPad, iPhone and other tablet computing platforms powered entirely by Google’s Android 3 operating systems such as Motorola’s Xoom, it can be predicted that consumption of virtual tour content, through the use of Adobe Flash and HTML5/CSS3 driven virtual tours will only increase over time.